Erratum: The headline previously read “40M+ Filipinos live over 2 hours away from a DOH HIV testing center.” This was incorrect, and we apologize for the mistake. The correct figure is 30M.”

Every hour, one Filipino gets the Human Immunodeficiency Virus (HIV) for the rest of his or her life. This is the estimate we get from the record breaking number of new cases in 2017: 11,101 (a whooping 3500% increase in just a decade). And the problem is likely worse than we know — an estimated one out of every seven people with HIV is unaware they have the virus. In 2018, the Philippines has the fastest growing HIV/AIDS epidemic in Asia-Pacific and three years before, the whole world — not our kind of Filipino pride. 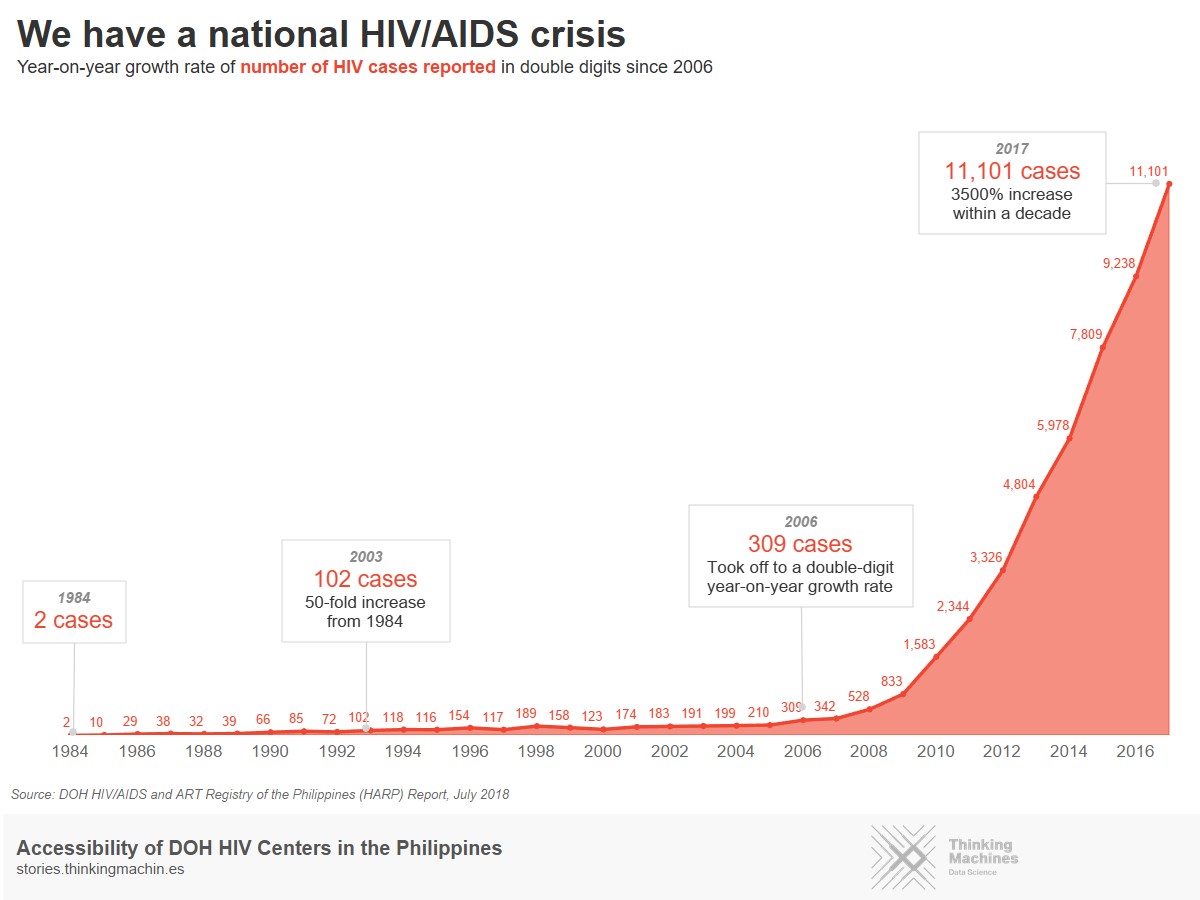 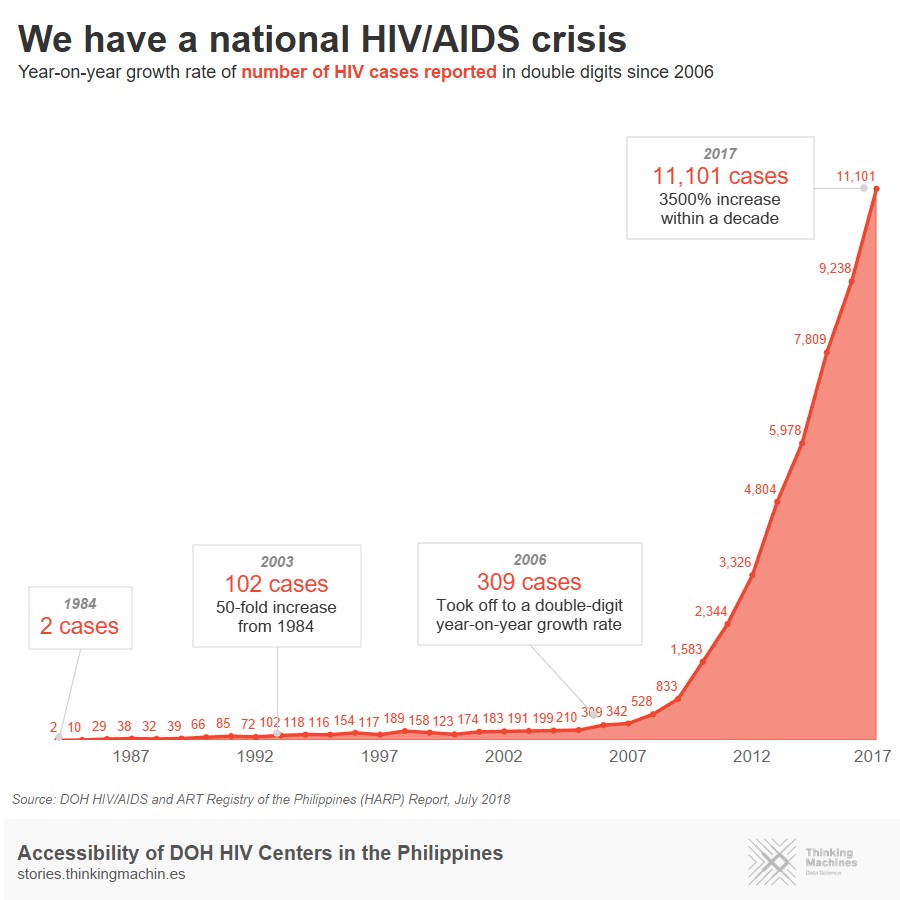 Early HIV detection and treatment are critical to preventing patients from developing full-blown AIDS (Acute Immunodeficiency Syndrome) and transmitting the virus to their partners or children. The U.S. Center for Disease Control and Prevention (CDC) recommends that everyone aged 13 to 64 be tested for HIV at least once as part of routine health care. Those who are at high-risk for infection should be tested even more frequently.

But with a limited number of HIV testing centers spread across the Philippines, are there enough facilities to meet the demand?

Our analysis shows: Not everywhere.

We estimate that some 28.5 million Filipinos – around 29% of the population – need to travel more than two hours by car to reach the nearest DOH-designated HIV testing center. Another 3 million (3% of the population) live in areas so isolated that many healthcare services, including HIV testing, are practically inaccessible.

We learned this by dividing the country’s populated areas into equally-sized hexagon-shaped tiles, and measuring the driving time between each tile’s center and its nearest HIV testing facility. The resulting three-dimensional Philippine map, shown below, visualizes population and HIV-center accessibility across the country. Of special concern are areas with high population (represented by the taller bars) and low HIV-center access (orange, red).

As you explore this map, note some important caveats. First, our analysis only includes the 92 HIV testing centers listed in the DOH’s HIV/AIDS & ART Registry of the Philippines (HAARP) reports as of July 2018. This list doesn’t include private hospitals and non-profits (such as LoveYourself) that also offer HIV testing. In the future, we’d love to add these to our analysis. If you know of other HIV testing centers that we should add to this list, message us at [email protected].

Second, we used the Bing Maps API to generate travel times by driving. But for the majority of Filipinos who rely on public transportation, actual travel times would likely be even longer. [Read our technical notes for more details on the methodology.]

View this map in full-screen

There aren’t enough facilities to serve all Filipinos who need HIV testing. But if the DOH will invest in setting up new facilities, which areas should they prioritize? 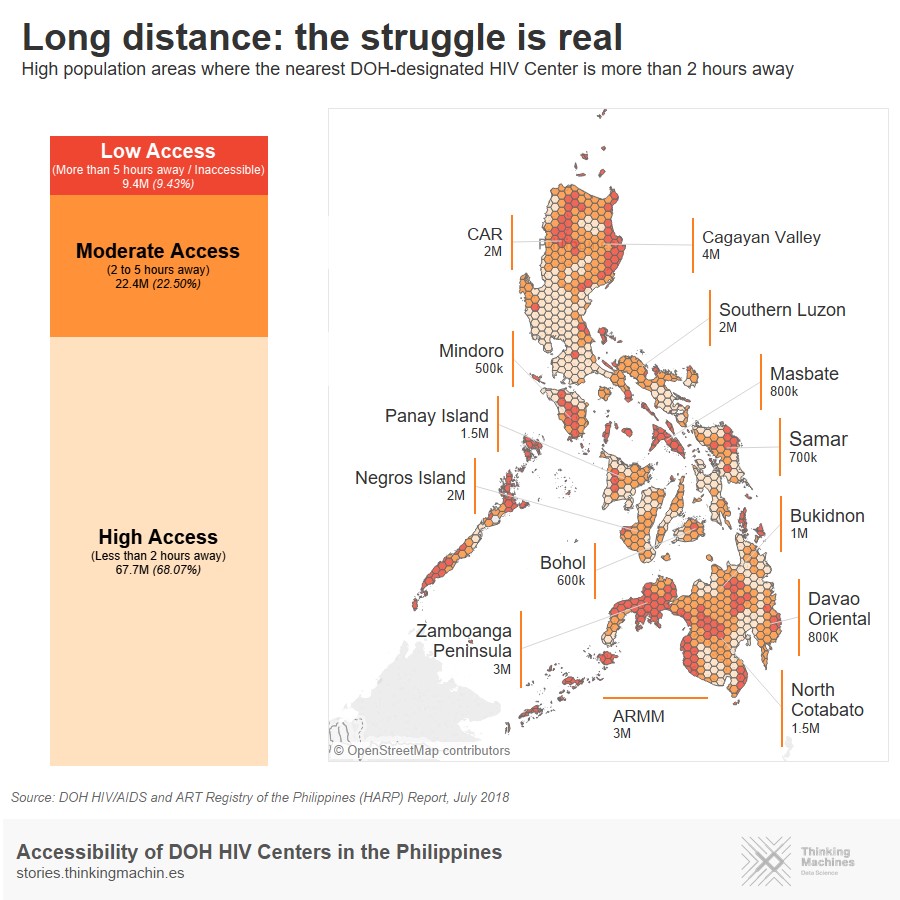 But even in areas within reasonable driving distance to an HIV center, are the existing facilities enough to serve the population?

We wanted to estimate, even in a simple way, how many people each HIV testing center might need to serve. Let’s assume that even just 10% of everyone 15 years old and above (70% of the population according to the Philippine Statistics Authority) gets tested just once a year at their nearest DOH-designated HIV center. How many expected patients per day would each center need to handle? Of course, we could more accurately estimate burden if we had data on each center’s actual capacity and historical demand, but this approach is a start.

Fortunately for people living near “high burden” centers in Metro Manila – such as the NCR North HIV Centers and the Research Institute for Tropical Medicine in Muntinlupa – there are plenty other nearby HIV centers to visit even if the closest one gets too busy.

But for those living near centers like the Northern Mindanao Medical Center or Bicol Regional Training Center, the next-closest testing centers would be hundreds of kilometers away.

To relieve high-burden centers, decision-makers can consider providing these with more resources or adding new hubs nearby to absorb demand. In the context of HIV testing, supply planning would involve procurement of testing supplies and hiring of personnel trained in handling sensitive data. 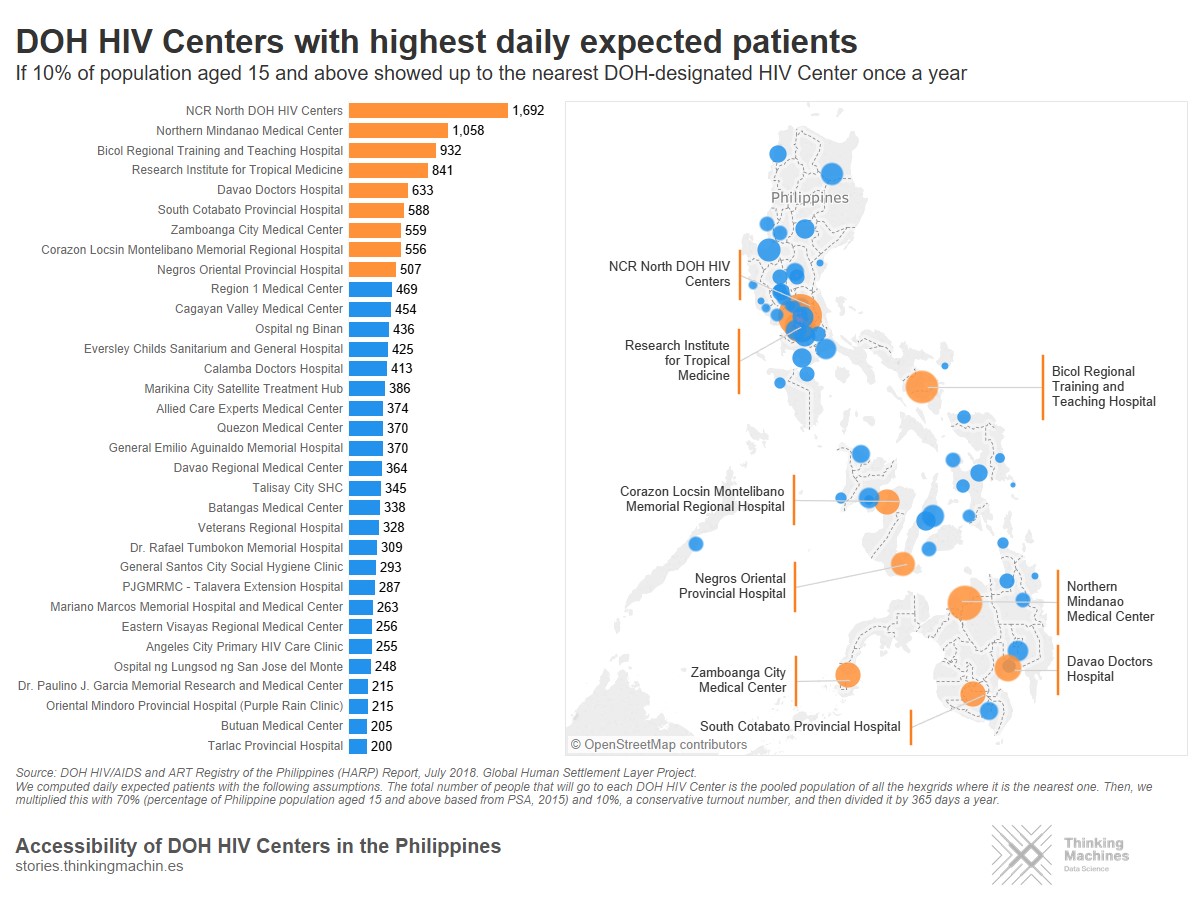 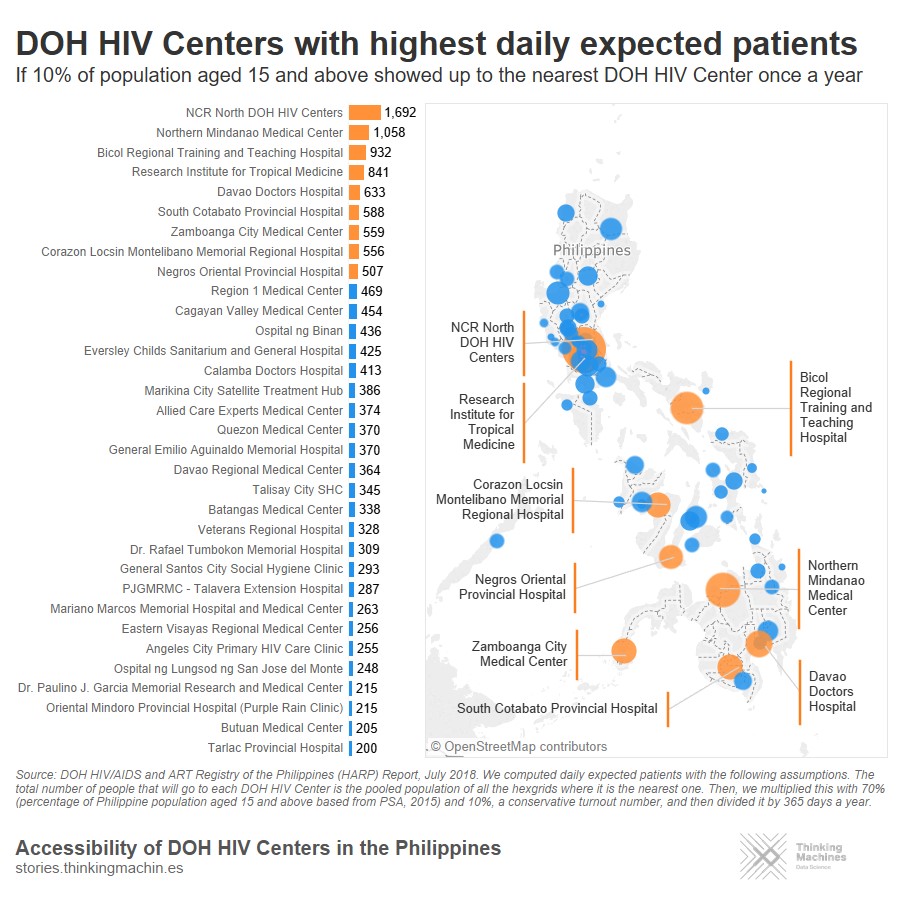 Safe, not sorry. Where can I get tested?

Maybe you’re thinking, “Yes, I know, I should get tested. But where?” Fam, we gotchu.

While HIV care is not as time-sensitive as other healthcare concerns like childbirth or accidents, making the decision to get tested is just easier if you know where to go and how long it’ll take to get there.

Use our interactive map to search for the nearest DOH-designated (and free!) HIV center to you. But please remember to check whether your nearby private or non-profits healthcare facilities (like Love Yourself’s testing sites) also offer HIV testing. And for the tech savvy, you can even consider ordering an HIV test online and taking it at home.

There are many factors that hinder people from getting tested for HIV. There’s fear and stigma surrounding the disease, which is associated with sexual promiscuity. There are legal hurdles for minors who can’t get tested without parental consent. So for people who already have the awareness and courage to get tested, we hope that HIV testing can at least be made accessible and convenient.

After all, if we can’t measure the true prevalence of the disease, we can’t effectively mobilize our resources to stop it from spreading.

For this analysis, we used the list of DOH-designated HIV Treatment Hubs & Primary HIV Care Facilities as published in the HIV/AIDS & Art Registry of the Philippines (HAARP) reports. We searched for the coordinates of each facility on Google Maps and used QGIS to do our nearest hub analysis. We first divided the Philippines into equally-sized hexagon-shaped tiles or “hexbins.” This allows us to analyze geographical areas independently from administrative boundaries. Using raster data from the Global Human Settlement Layer Project, we then estimated the population living within each hexbin. We used the Bing Maps API to estimate the travel distance and driving time from the center (centroid) of each hexbin to its HIV facility. The 3D interactive map was built using Mapbox.

Are you interested in doing a similar analysis for your organization? Message us at [email protected]