Mind the gap: A gender parity analysis of UPCAT passers

Have you heard of the saying, “Men are from Mars, women are from Venus”? In the University of the Philippines, men are from Engineering and women are everywhere. We gender-classified the first names of all passers of the University of the Philippines College Admission Test or UPCAT from 2012 to 2018 to bust some popular gender myths: Is technology really for dudes? Is there really a shortage of female scientists? Are fitness junkies mostly bros?

But first, let’s test your own notions with this eight-point quiz: (No thanks, just show me the rest of the article).

1. What’s the most gender-balanced UP campus based on UPCAT passers?

2. Which degree program is the most male-dominated among the following?

3. Which degree program is the most female-dominated among the following?

4. What’s the most gender-balanced UP degree program based on UPCAT passers?

5. What is the most popular female first name among UPCAT passers?

6. What is the most popular male name among UPCAT passers?

7. What is the most common surname among UPCAT passers?

8. Which of the following names DOES NOT belong to a real UPCAT passer?

Who run the UPCAT? Girls.

Here’s a global paradox: even though women are reaching higher levels of education than men, more men are in the workforce. Despite the Philippines’ rank as the most gender-equal country in Asia, the country is no exception. According to the Philippine Statistics Authority, less than half of women (46.2%) are in the workforce compared to more than three fourths of men (76.2%), even though 22.7% of women finish college compared to only 18.4% of men.

For the past seven years, women have consistently outnumbered men three to one among UPCAT passers. The gap was only closed in 2016 and 2017, irregular years that saw 90% fewer examinees because of the implementation of K-12. During these years, some courses’ traditional gender skew temporarily flipped before returning to “normal” in 2018. 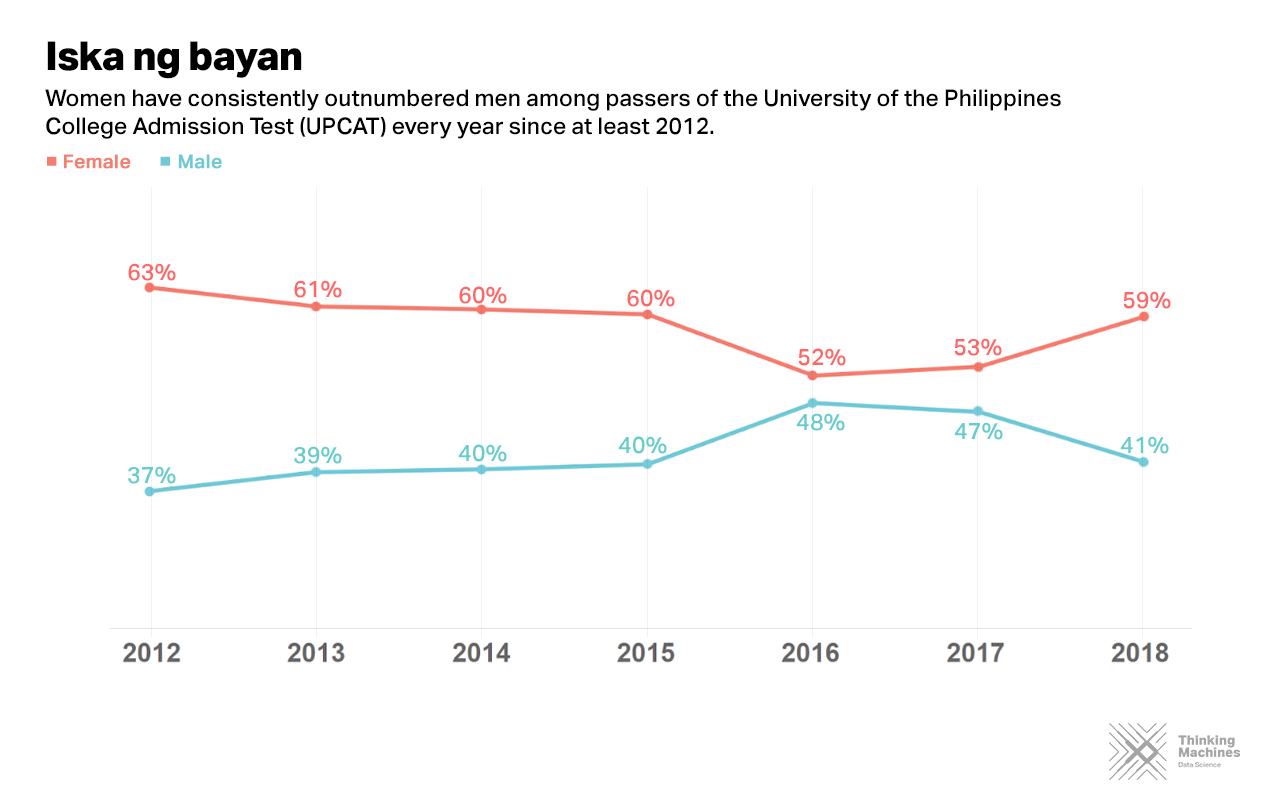 What could explain this? According to UNICEF and The Economist, young girls are socialized to become more conscientious in household chores and schoolwork while young boys are given more freedom to play online and outdoors. Later in life, the great pressure men face to provide financially for their families may lead to academic underperformance and dropping out, especially among poorer households. On the other hand, women might feel more driven to achieve academically to prepare themselves for the glass ceilings, glass cliffs, and negative stereotypes they are more likely to face in the workplace: that they’re too emotional, can’t lead, should stay home with the kids, or “cause trouble because men fall in love with them” (as one Nobel Laureate controversially expressed).

The persistent bias for males and against females manifests as early as recruiters make character judgements based on names alone. A famous Yale study (2012) found that John’s application was graded higher than Jennifer’s in terms of competence, "hireability", and mentoring potential even if they had identical qualifications.

STEM is the most gender-balanced academic cluster

Where are the women scientists, you ask? We considered an academic cluster or degree program to be “gender-balanced” when the ratios of both male and female passers fell between 45 and 55%. Contrary to expectations, STEM (Science, Technology, Engineering, Mathematics), on the whole, was the most gender-balanced academic cluster, with a 1:1 male-female parity. The remaining four academic clusters— Arts and Letters, Management and Economics, Social Sciences, and Health Sciences—were all female-dominated.

Gender ratios skewed even more sharply within individual degrees. Out of 107 courses, only 10 were gender-balanced: Biochemistry, Chemical Engineering, Forestry, Geology, Industrial Engineering, Materials Engineering, Mathematics, Molecular Biology and Biotechnology, Music, and Sports Science/Physical Education. Of the remaining 97 degrees that skewed either male or female, 85 were female-dominated and 12 were male-dominated.

While there doesn’t seem to be a scarcity of potential female scientists, potential female engineers are harder to find. Of the 12 dude-heavy courses, eight were engineering programs. In the most male dominated program, Mechanical Engineering, the ratio of males to females is 4:1. In tech, Computer Engineering and Computer Science are also slightly male-dominated. 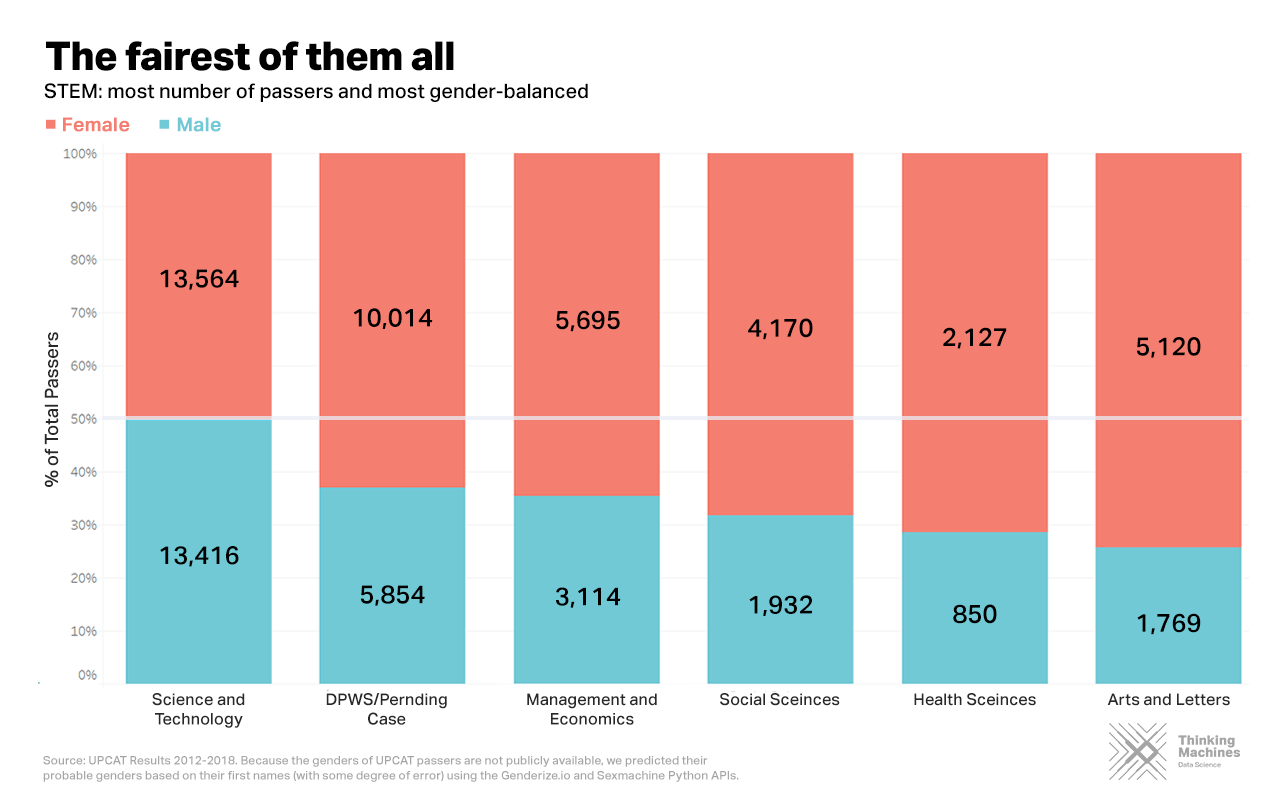 These findings support the idea that traditional notions of masculinity might prohibit men from entering professions associated with such “feminine” pursuits as caring for people (e.g. teacher, psychologist, social worker, health professional) or making things beautiful and functional (e.g. interior design, fashion design). Even at an early age, toys are segregated: boys are given toy tractors, building blocks, and toy guns while girls are given dolls, toy kitchens, and make-believe make-up sets.

If gender socialization does affect the career paths that people take as adults, men may actually have fewer options that may not be representative of what they really want. Girls, despite the challenges they face, are often encouraged to “break the mold” and pursue interests, careers, and roles that are more stereotypically male. Meanwhile, boys are rarely rewarded for taking on roles more often associated with the feminine.

Perhaps this is why it’s not as hard to find a female Mathematician or Molecular Biologist (the two most gender-balanced courses in UP) as it is to find a male Clothing Technologist — the true UPCAT unicorn, outnumbered one to nine by his female coursemates.

How gender-balanced (or skewed) is your degree? Find your degree program and name in this Tableau interactive dashboard:

We scraped the names of UPCAT passers from 2012 to 2018 from the UPCAT Results website. We then classified the degree programs into the four main Academic Clusters used in UP Diliman (Arts and Letters, Management and Economics, STEM, Social Sciences) plus the Health Sciences. We also chose to combine extremely similar degree programs. Economics and Social Sciences (Economics) were grouped as Economics; Sports Science was combined with Physical Education; Malikhaing Pagsulat sa Filipino, Philippine Studies, Filipino at Panitikan ng Pilipinas, Filipino, and Araling Pilipino were combined as Filipino.

Because the genders of UPCAT passers are not publicly available, we used each passer's first name to predict (with some margin of error) their most likely gender. To do this we used two Python libraries: Genderize.io, and an unfortunately named Python library called “Sexmachine” which classifies names into Female, Male, and Andy (short for androgynous). Because most people have multiple names, we first classified each person’s first name. If the libraries were unable to classify a person’s first name, we’d move to the second, third, and then fourth names. We used Genderize.io to classify the top 1000 names, and Sexmachine to classify the rest. Genderize checks names against a database of 216,286 distinct names across 79 countries and 89 languages. Sexmachine employs a similar technique. Both have their limitations. For example, we noticed that Sexmachine classified Alexis and Jamie as male while Casey and Val as female, although these are popular gender-neutral names. When calculating gender ratios per cluster and degree, we excluded the remaining 3% of names of unclear gender.

We used our own judgment to classify names that the libraries couldn’t figure out. For example, we classified names that end in -ann, -joy, -lyn, -elle, and -ette and their derivatives as female, and names that end with -bert, -win, -vin, -ald as male. The more unique the names got, the harder they were to classify. There were unique spellings, too. How many ways can you spell Stephanie? Just around 10. We were surprised to see that there are names with numbers and apostrophes. Take your shot and classify these interesting names: Arsenic, Glycerin, Klebsiella, Zea Maize, and Zygote. Filipinos do have a knack for making their babies’ names unique.

Using Machine Learning Classification Models and Natural Language Processing to gender-classify names continues to be tricky. Most programs are trained on Western names and are not effective for culturally-specific ones. Access to training data is also limited since gender and sex are considered personal information protected by data privacy laws. Lastly, the gender conventions associated with names are blurring as quickly as gender roles themselves. Gender-neutral names, otherwise known as epicene or androgynous names, are more popular than ever. But while many traditionally male names have crossed over to becoming popular female names (e.g. Alex and Taylor), it’s harder to find examples of the reverse. Even in 2018, a little girl named “Charlie” will probably raise fewer eyebrows than a little boy named “Charlotte.”

Makeover Your Charts with These 5 Design Hacks

Kailan ka ikakasal? Four data-driven comebacks to use at your next family reunion