This is the first of a three-part series of data stories on road safety. Follow the links to the second and third installments:

Do you personally know someone who has been hurt or even killed in a road accident?

Road accidents are so commonplace, we view them as an inevitability of city living – an unavoidable fact of life, like old age or illness. But there’s a difference between accidents that scratch up a car, and accidents that end with you or your loved ones in the hospital.

Recently our team worked on a data analysis project for the World Health Organization about road safety. During the project, we learned that road crashes are quickly becoming a leading cause of death and injury in developing countries, including the Philippines.

An estimated 8,499 Filipinos die every year in road crashes, and the numbers are growing yearly.1 If nothing is done to address the problem, the Department of Transportation and Communication predicts around 300,000 Filipinos -- roughly equivalent to the population of Mandaluyong -- will have died on Philippine roads between 2010 and 2020.

Development organizations like the World Health Organization and World Bank have identified traffic-related deaths and injuries as a full-blown public health crisis, like cancer or HIV/AIDS.

If road users understand what types of travel are predictably riskier than others, they can take extra precautions when they find themselves in dangerous road situations. Authorities can also focus manpower and resources on preventing the types of incidents that are far more likely to end tragically.

Of these incidents, over 81 percent -- the vast majority -- only resulted in damage to property. Around 18.5 percent of the incidents recorded at least one injured person, while just 0.4 percent of incidents were fatal, or resulted in at least one death. However, the number of fatalities is almost certainly underreported, mainly counting victims who died on the spot. It’s very likely that some of the victims reported as injured may have later been brought to the hospital and died from their injuries.2

How likely is it that if you get in an accident on your daily commute, it will result in someone getting hurt or killed?3 We calculated for the “casualty likelihood” of different types of incidents based on various factors -- such as time of day, day of the week, and types of vehicles involved.

“Casualty likelihood” is the likelihood that if an accident does happen, it will result in at least one death or injury.

The most interesting nuggets our team found are as follows:

Pedestrians made up 44% of fatalities

In 2014, there were 443 people killed and 20,899 people injured on Metro Manila roads. Pedestrians comprised 44% or nearly half of the fatalities, while drivers and passengers comprised 40 and 16 percent.

(Read: More pedestrians hit by motorcycles than by cars in Metro Manila since 2005)

Among the injured, 42 percent were drivers, followed by pedestrians at 30 percent and passengers at 27 percent.

Who’s more vulnerable on the road?

While just around 1.7 percent of drivers and passengers who figure in accidents actually get killed, the ratio rises to 3 percent for pedestrians.

Who’s more vulnerable on the road?

Percent of Total Hourly Traffic Incidents that Resulted in Death

Two- and three-wheeled vehicles are the most vulnerable

The fewer wheels a vehicle has, the more vulnerable it is on the road. Over half of all traffic incidents involving either a motorcycle or a bicycle resulted in injury or death, versus fewer than 10 percent of incidents involving four-wheeled vehicles like vans, trucks, and cars.

While bicycle and motorcycles riders are most at risk, their chances of getting hurt or killed rise when they come into contact with larger vehicles. If you’re riding a bicycle and you get into an accident with a bus, there’s an near 85% chance that somebody is going to be killed or hurt. Incidents involving bicycles and motorcycles aren’t far behind with a casualty likelihood of 80.25%, followed by trucks and bicycles at 73%. 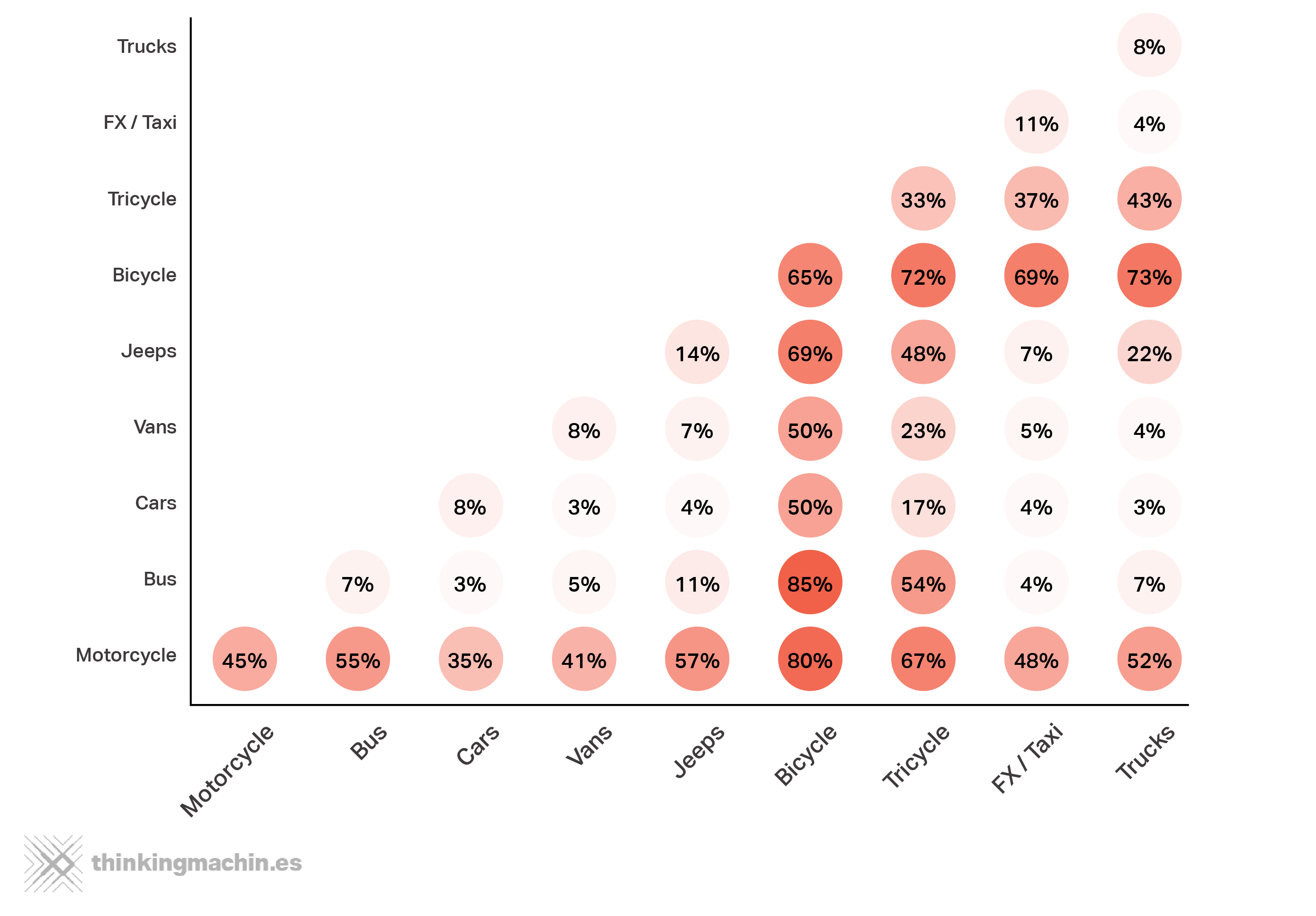 10 Most Crash-Prone Streets and Cities in Metro Manila