Build your own maps with this open source D3 Philippine cartogram

The problem with geographical maps is that they sometimes don't accurately represent data about people. For example, Metro Manila only occupies a tiny spot on the Philippine map, but accounts for a huge chunk of the total Philippine population.

Because cartograms try to solve this problem, they've become more popular in international news media. NPR, the Washington Post, and FiveThirtyEight have all used cartograms in their coverage of the 2016 US elections:

But cartograms can be a pain to build. Trust us, we’ve tried. There are a few existing tools you can use, but they don’t always produce the most attractive results. You can also try manually building one, like we did last May for the Philippine elections. But this can be a major time-suck and isn’t scalable. 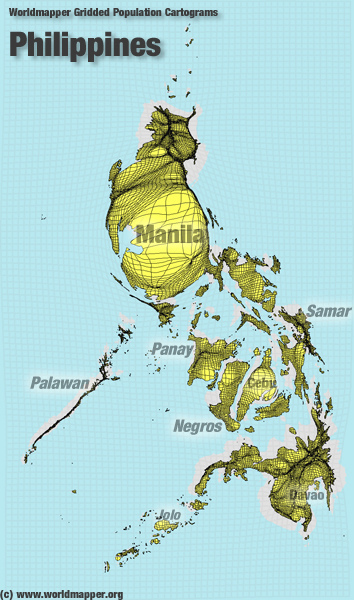 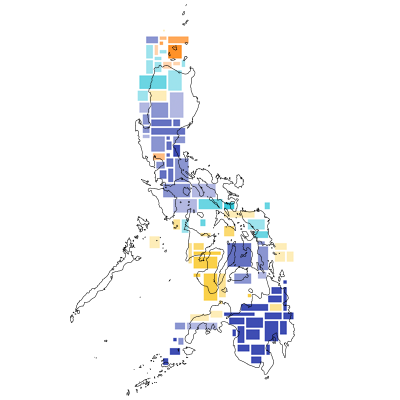 To make life a little easier for anyone interested in building a Philippine cartogram, we’ve developed a bit of open source code with d3 and topojson. You can use this code to customize your own Philippine map with different variables and colors. Check it out:

How to use it

Some CSS rules you should include:

Make sure you include all the javascript libraries required:

Don't forget to put the data files in your data folder: philippines-topo2.json and philpoverty2015.csv!

Insert a div in your body:

All you need is to make sure that you are pointing to the right data files and call the simpleCartogram function with the ID of the div you want the chart to appear in and the color of the map:

How we made it

How to use a different variable aside from population

You can reconfigure our code to easily generate a cartogram that uses a variable other than population.

Call the customCartogram function with the ID of the div in which you want the chart to appear, the path to your new data source, the name of the value column in the csv file, the label of the value, and the color of the map.

When using a new csv file, make sure that the province names match each other and are in all caps.

How to turn the cartogram into a choropleth

If you want to turn your cartogram into a choropleth or heatmap, that’s also doable.

Call the chloroplethCartogram function with the ID of the div in which you want the chart to appear, the path to your new data source, the name of the value column in the csv file, the label of the value, and the color of the map:

If you make something cool with our cartogram code, we’d love to see it! E-mail it to [email protected] or tweet us at @thinkdatasci. We’ll share our favorites on this blog post.

Go forth and map!


Enjoyed this data story? Want to supercharge your content marketing strategy with data? Send us an email at [email protected]

Off the map: An alternative way of visualizing the Philippine election results

The language landscape of the Philippines in 4 maps